UPDATE: Visible now has a designated page with updates and resources for COVID-19 here.

Classes at American University will shift completely online for the remainder of the semester, due to growing concerns around the novel coronavirus pandemic, abruptly leaving some students without the resources that they rely on throughout the school year.

On Tuesday, March 10, the president of American University, Sylvia Burwell, emailed the AU community to announce that in-person classes were to be suspended until at least April 3 and that virtual classes would occur in the meantime. Two days later on March 12, the president sent out another email update, writing that online classes will continue through the rest of the 2020 spring semester.

The emails detailed that students who currently use the residence halls are to return to their permanent home addresses by Monday, March 3, at the latest. All AU study abroad programs have been canceled following President Donald Trump’s 30-day travel ban to Europe. Virtual classes will not begin until March 18 to allow professors to adjust classes appropriately. Beginning on March 16, the majority of on-campus operations will shift to telework, including services such as counseling and academic support. All university-sponsored events and domestic travel are now suspended until at least May 5.

“We understand these are significant disruptions. However, today’s actions will support the safety of our students, faculty, and staff, and also the broader public” Burwell wrote in her March 12 email announcement. “Limiting in-person interactions, travel, and events will help reduce the possibility of transmission and spread of COVID-19 both to and from our community.”

Burwell isn’t new to managing these types of issues either. From 2014-2017, she served as the Secretary of Health and Human Services under the Obama administration. As secretary, she responded to the Ebola epidemic of 2014 and the 2016 Zika virus.

“I know the importance of the team on the ground – from public health officials to universities and local communities – coming together to help,” Burwell said.

The president’s history in national health management has some students like AU senior Andrew Laureti confident in the school’s response. “Honestly I’m proud,”

“Honestly I’m proud,” the political science and government major at American university said. “This is one of the first times that AU has actually stepped up to the plate and been proactive about a matter. I trust that she personally understands the student concern.”

He said that he believes the university has made the right decision in postponing in-person classes due to the Coronavirus. “This is more than an issue confined to just the student body,” Laureti said. “It’s a global issue so we have to act accordingly and I think that’s exactly what American University is trying to do.”

“Burwell was just being really cautious and she does know what she’s doing,” the international service major said. “We should be glad that she’s on the board and makes these kinds of decisions.”

Others aren’t as optimistic. Christian Ortiz attends Georgetown University which, similar to AU, announced a transition to virtual classes until further notice in response to the coronavirus on the morning of March 11. While he does say he believes Georgetown’s decision to go virtual was right, he also mentions — as a financially independent student — the compromised realities that underprivileged students will face as well.

Students experiencing food insecurity, those who financially depend on work-study campus positions, those with no homes to return to are some of the different communities that Ortiz said he is concerned about with this switch.

“I have a part-time job waiting for me back at home, but I know many of my peers in similar financial situations might not have that readily accessible to them,” he said.

“It’s truly a shame to see this when many of these institutions have multi-billion dollar endowments that can easily afford them the ability to accommodate these students’ needs.”

For Ortiz, he said that his access to adequate WiFi will be an obstacle for his upcoming virtual studies. Situations like these are applicable to almost one-third of American households who do not have broadband internet connections, according to The NPD Research Company.

As for the future with online classes, AU International Relations student Anny Arroyo Pena predicts that students will actually pack into public spaces more in order to utilize free resources like WiFi. From her own experience, she said that many students typically don’t buy textbooks for classes because they are too expensive and rely on public spaces like the library instead.

“Students are still going to go to the library for their books and I don’t blame them because I would not go out and buy my textbooks either,” she said. “How long are you going to be in your room before you have to go out and socialize with people? We’re going to go to places around campus.”

Arroyo Pena also said that she agrees with the university’s overall decision to close in-person teaching, but said that she wished there were more clarity, transparency, direction from AU in their initial announcement email.

Director of Public Affairs at American University Stacie Burgess advised students “to contact individual faculty members and instructors to discuss arrangements,” if they should have problems in regard to necessary resources to complete their virtual classwork. “Faculty are working to be flexible and provide support for students,” she said.

For students who may have difficulty or the inability to return home so abruptly, President Burwell advises students to contact the Office of Campus Life for help at EmergencyHousing20@american.edu.

“We know this is challenging and stressful for students and their families and can cause financial and other hardships,” Burwell wrote. “American University will work with students to provide support to facilitate this transition.”

Many students have taken to Twitter to express their distress during the situation, mentioning concerns over tuition remaining the same amount despite a reduction of campus resources and Eaglebuck reimbursements.

“AU is really putting me out of my HOME. I’m not just here for the school academic year. I’m here ALL YEAR. And they’re making me move out. Where is my stuff supposed to go???” American University sophomore @woahkeana tweeted after the email announcement.

But as Coronavirus-related deaths continue to rapidly multiply around the world, Laureti said he thinks we should look at the bigger picture of it all.

“This is a really really really big problem, and for us to ignore that and complain is just incredibly irresponsible and it’s selfish,” the senior said. “I think we have to ensure that the wellness of all is put in front.”

Students at American University will have more instructions from their faculty prior to March 18, which is when online classes are to begin, according to President Burwell’s email announcement.

The AU community was advised to consistently check their emails and the university’s Coronavirus webpage for more updates. 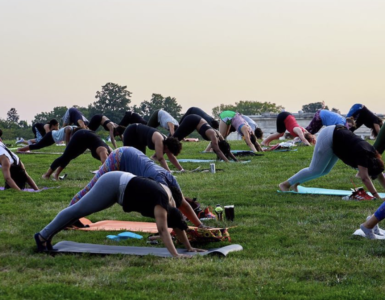